From time to time, usually during periods of higher enforcement of the parking restrictions on the first and third Mondays of each month (except for holidays like Labor Day), there is a great deal of discussion about Rossmoor not having signs posted, why don’t we have “civilized” or “logical” parking restrictions like opposite sides of the street, and it’s a scam / just a way for the county to make money.

Like most things that have been around for a while, in this case since at least the late-1970’s, it’s not that simple. As a point of reference, here is some historical perspective on the restrictions and why we have the restrictions we have today. 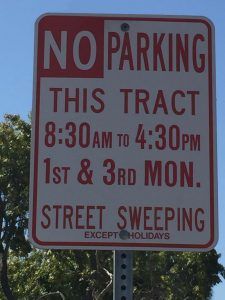 Simply stated and posted at each entrance into Rossmoor:

There is no parking on the 1st and 3rd Mondays of each month (except holidays) from 8:30 AM to 4:30 PM for street sweeping. Parking citations can be issued by the Sheriff’s Department or the California Highway Patrol at any time during this period.

So back in the dark ages of the late 1970’s it was deemed that Rossmoor streets needed to be swept. The catalyst to this event is not clear, but it happened. If any of you long-time residents have the details, please share them with us here.

At any rate, there was some discussion about the signs, costs, and visual appeal of the implementation of the Rossmoor Street Sweeping program, an ordinance passed by the Orange County Board of Supervisors, and a sweeping contract was signed by the County. The ordinance assigned the County Sheriff the enforcement duties.

The residents of Rossmoor did not like the idea of parking restrictions, but the County did not give them a choice. However, since the resident’s property tax funds were being spent on installing the signs and most did not like the idea or visual clutter of a no parking sign being posted every 200-300 feet on both sides of every block, let alone the bill associated with the manufacture and installation of all of these signs, it was decided that entrance sign was the best way to implement the new street sweeping policy. On appeal, these signs have been upheld by the Orange County Courts as sufficient notice as well.

This two-day a month plan also reduced the cost of the street sweeping contract as the contractor could schedule the entire tract to be done in two full days reducing employee and machine costs in the process. This became the agreed-upon implementation plan. And, there have been very few changes to this implementation ever since then.

There was some fairly good enforcement initially, then there were budget cuts, the County went bankrupt, there was a real estate bubble or two, and enforcement got very lax and almost non-existent. Life was good. New neighbors moved in as our old neighbors moved on and Rossmoor did what Rossmoor does. Rossmoor residents increased the number of cars they own, their garages filled with storage items, and generally, parking became less available.

Over the decades for various reasons, there have been a number of higher enforcement periods. Generally, the enforcement comes about due to a County health focus or the North County Sheriff’s office getting multiple complaints about vehicles preventing the sweeper from cleaning a particular street. Generally, parking enforcement has been done by following the sweeper route and after the sweeper has completed a street, cars could return to park there.

Fast forward to 2015 and the “El Niño”  heavy rain concerns, coupled with the diseases carried by mosquitoes and neighbor complaints about missed sweeping, created the “perfect storm.” And the Sheriff’s Department responded by once again vigilantly enforcing the parking restrictions and have been ticketing much more regularly. And, the complaints about getting tickets and the “unfairness” (note: fair is a weather condition, it has nothing to do with life) once again begin to surface.

Possible Solutions Come with a Cost

The first question that usually comes up is why don’t we have odd/even or alternate side parking restrictions like they do in Long Beach or other areas?

The answer to this question is twofold. Rossmoor residents have not wanted to pay for the manufacturing and installation of the signs with increased property taxes or a short-term assessment. Historically, Rossmoor votes down any tax increases. The second reason is Rossmoor residents have not supported the additional signs being placed every 200-300 feet along each block in the tract. The feeling has been that these signs are unattractive, create even more visual clutter, and could decrease property values because of their installation. Additionally, there would be increased sweeping costs as the sweepers would have to come back on a different day or the streets would only get swept once a month.

The next typical questions/complaints go to lack of notice (“there’s no sign on my block, I checked”), what about visitors/guests or contractors.

We’ve covered the signs being upheld as sufficient notice according to the OC Courts already. Guests drive their vehicles into Rossmoor right past these same signs. Notice given.  And actively engaged construction vehicles are generally exempt and the OCSD tends to not ticket delivery vehicles that are in use (think FedEx and UPS). A business vehicle that is not “in use” is typically treated just like any other vehicle and is subject to ticketing.

The third question is why don’t cars on my street or that street get tickets.

This one comes down to manpower as much as anything else. There are three to five sweeper routes in the tract on any given Sweeper Monday. One or two OCSD personnel issuing tickets cannot keep up with 3-5 routes. Additionally, when they stop to write a citation, they lose the sweeper and then just follow the route. Some officers will look for vehicles that obviously caused the sweeper to miss the curb, trying to follow the spirit of the law which is to allow the sweepers to clean the gutters in the tract.  This is not always the case and sometimes vehicles get tickets even if they were not in the sweeper’s path or came back after the sweeper has passed.

The flip side of this is also true in that some streets don’t get ticketed as frequently as others. If this is a concern of yours, call the OCSD and let them know you’d like your street looked at for possible violations on an upcoming Sweeper Monday. While there are no promises, it is likely that eventually, the parking restrictions for the requested street will be enforced.

If you have any questions or would like to add some background to the Rossmoor Street Sweeper story, please contact us here. If you have an idea or solution that has not been discussed, please do let us know.

It’s not a simple issue though, we are sure there is or will be a workable solution available at some time that will satisfy more Rossmoor residents.

Please note that neither the RHA nor the RCSD has any control over when or if parking citations are issued in the tract. The parking regulation signs are posted at each entrance to the tract and have been deemed sufficient notification for the citations by the Orange County courts. At times no tickets are issued and during some periods, especially when mosquitoes are prevalent, enforcement is much more aggressive.