Architecture of all the arts, is the one which acts the most slowly but the most surely, on the soul — Ernest Dimnet, French Clergyman.

Confidence and love of community characterize those who grew up in Rossmoor, and it’s no wonder. Even fragile, time-yellowed pages of the Rossmoor News, from Spring 1959, illustrate the high standards of early planners and architects.

“1958 was … a year of records and awards for Rossmoor. Thanks to the fine families who live in Rossmoor, the community’s increasing popularity led to a new Southern California real estate record for selling the most homes in one day — 70.”

Americans longed to rediscover Shangra-La following WWII and the Korean War. Images of home were perfected in the new architectural genre — the storybook- and modern-ranch homes.

Rossmoor mid-century provincials were originally advertised in brochures with conspicuously Disneyesque illustrations. Since Tomorrowland was designed by a member of Ross W. Cortese’s architectural team, Earl Kaltenbach, this may not have been a coincidence.

As the nine sections of Rossmoor were built, each named for a famous college, the burgeoning Rossmoor Center too, was filling with an array of diverse architectural styles:

Next door to Rossmoor’s Bowling Alley, located in the current Shops at Rossmoor, stood the Tudor Rossmoor Inn restaurant. Partitions between booths ornamented with medieval castles, heraldic banners suspended from rafters and a suit of armor next to a vast Tudor fireplace lent a dramatic touch to the family restaurant and buffet.

In 1967, the Googie-style Parasol was constructed to imitate its namesake, today re-purposed as Panera Bread. Appearing in the 1973 movie, American Graffiti, it became a Googie icon. Interiors were originally decorated with pink parasol-shaped chandeliers and sconces. Booths were upholstered in a matching shade of rose.

On the south side of the Rossmoor Shopping Center was the ultra-modern Union Federal Bank, a single-level cylindrical structure.

Designed for aesthetics, Rossmoor homes combine contrasting textures and profiles to maximize the effects of light and shadow. Board and batten siding, brick cladding, combed stucco, diamond muntins and dovecotes (bird houses) are just a sample of many eye-pleasing features.

Rossmoor’s Golden Estate was nationally recognized in 1958 for its contemporary functionality with a Design Merit award from the National Association of Home Builders. Rossmoor was the only community within the LA vicinity to have a home design chosen for this auspicious distinction.

DeWitt Lee, of Walker & Lee, sales agents for the community, accepted the award for developer Ross Cortese at the NAHB convention in Chicago. Rossmoor’s street name Walker Lee is taken from this agency.

Designed by Chris Choate (renowned for his hardware-free, sliding closet doors) and architect Robert G. Jones, The Golden Estate is a three-bedroom ranch home. It features a 12 x 28 living room, highlighted by a fireplace, flanked by a built-in planter and hearth seat. Originally priced at $19,000, Estates models include all-electric, built-in kitchens, family rooms and dining rooms described as “sleek, compact and graceful.” 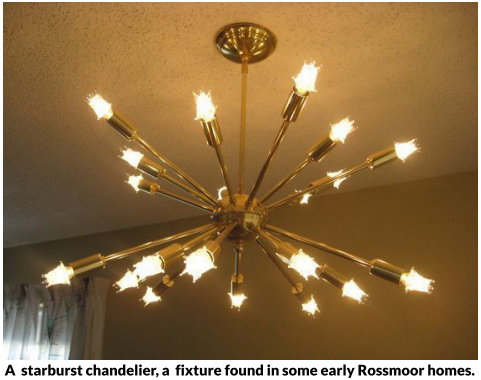 Recently spotted on Ebay was an original starburst chandelier from a Rossmoor Estates dining room for $900. Sparkling illumination was delivered by 24, 4-watt bulbs  cased in hand-blown glass mesh starbursts. When a bulb needed replacement, it first had to be soaked to dissolve glue that held the ornamental casing in place. Next, the glass starburst had to be glued to the new bulb and allowed to dry.

“Rossmoor also set a record by signing a contract with the Southern California Edison Co. for the construction of 451 ‘Medallion’ homes — the largest Medallion contract in the nation,” lauded another paragraph in the 1959 issue. This designation meant the kitchen was fitted with exclusively Frigidaire electric built-in appliances.

Such original Rossmoor homes came with a bronze medallion set into the concrete of the front porch. “Live better electrically” is the phrase emblazoned on the metal disk centered with simple figures representing a family in their energy-radiating home.

Cortese had just disclosed his plans for constructing 2,500 additional Medallion homes for Rossmoor. The total number projected at that time approached 4,000, overstated by about 500.

“In another architectural mood, Brittany Gardens is a spacious, four-bedroom home available in either Old English or Ranch Modern exterior styling. Priced at $22,000, this lavish home includes a real family-sized dining room plus a family room with a food bar and two complete bathrooms!”

“For the people who like homes ‘homey’, there are the Salem and the Farm House. For those who prefer a truly contemporary design, there is the award-winning Golden Estate or the striking new El Dorado.

Add Plymouth and the spacious four-bedroom Brittany Gardens, and you have virtually run the gamut in today’s preference in homes. All of us at Rossmoor sincerely feel that Rossmoor’s way of life — in any one of our fine models — is the way of life you’ve been looking for.”

I think we all agree.