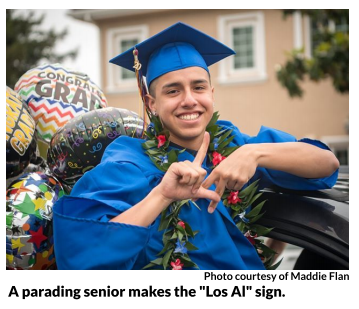 The viral pandemic of 2020 has caused overwhelming misery in the world, but a small piece of comfort was found on the streets of Rossmoor on a sunny day in late May.

About 4,000 people participated in a senior graduation parade over a two-mile route, one of the most successful community efforts in Rossmoor’s history.

The parade, organized and sponsored by the Rossmoor Homeowners Association, was a classic demonstration that tragedy can sometimes give rise to something unexpected, spontaneous and beautiful.

The COVID-19 disease had robbed the graduating class of a traditional graduation ceremony, perhaps only a minor issue given the loss of life, economic hardship and disruption of ordinary life we have all witnessed since March.

But to hundreds of 18-year-old kids, it was a punctuation mark on how much they were missing at an important transition in their lives.

The RHA began to brainstorm what we could do for the community during these dark times. Our festival committee proposed holding some type of celebration for the graduating seniors.

After a lot of discussion, the decision was made to propose a parade and invite every graduating senior at Los Alamitos High School to join.

We all like to think that the world is stable, orderly and predictable, but every generation encounters some form of chaos, whether it is war or sickness or economic devastation or genocide or environmental calamity. I keep hearing a big Earthquake is going to hit any day.

As I was watching our parade, one of the many tributes struck me. It was a pickup truck with a sign that said: 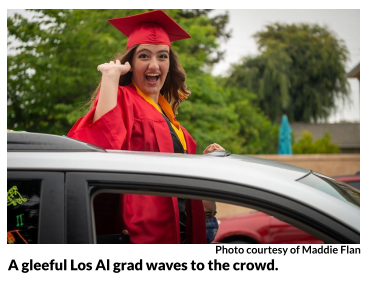 I snapped a photo and later caught up with John Newman, a Los Alamitos senior who is headed to UC Santa Barbara on a scholarship to play baseball. Newman’s mother, who gave birth on a very eventful day, made the sign, he said.

John told me that except for missing the tradition of a graduation ceremony he loved the parade.

“It was a lot better than sitting in the sun for five hours waiting for your name to be called,” he said. “It was more personal. We will never forget it.”

John drove his 2001 Chevy, the one his dad bought about the time of the 9/11 terrorist attack. The truck  now has 315,000 miles on it (who said Detroit doesn’t build great vehicles?). In the passenger seat was his girlfriend, Makena Carrion, who is headed to the University of Oregon on another athletic scholarship for acrobatics and tumbling.

Like so many other seniors, he lost a lot in his final year. The baseball team played only a dozen games, compared to the normal three dozen. Maybe one day, we all will watch John play on an MLB team.

Valedictorians couldn’t give their speeches. The performing artists in school had no one to appreciate their talents. The last great gathering of the class of 2020 was delayed by the school district, likely to be cancelled and banned by state order under directives in effect in May.

The parade could not have made up for all of this loss, but it did put a lot of smiles on people’s faces.

I saw seniors in their gowns with their families in the cars. I saw a group of four guys in one vehicle partying with music and another with four girls celebrating in the back of a truck. I saw graduates driving by themselves but they truly were not alone and wore bright smiles. 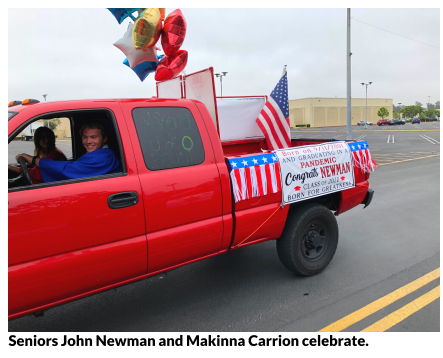 There were convertibles, sports cars, luxury sedans, beaters, classic cars and every kind of truck.  I haven’t heard so much honking since I was in New Delhi, India.  I saw one person who had installed pom-poms on the windshield wipers that were waving back and forth. Almost every car was decorated.

We had 2,000 people lining the route, including many homeowners, teachers and visitors. Another 2,000 people rode in the vehicles. A dozen police cruisers helped lead the parade, sirens blaring and lights flashing. There was fire truck. And a school bus full of teachers and volunteers.

Supervisor Michelle Steel, the highest elected official of Orange County, rode at the front of the parade in a Jeep. Steel’s district director, Tim Whitacre, later said, “Your out-of-the-box collaboration with the District is indicative of the CAN DO American spirit. Thanks to all of your efforts, the Class of 2020 has a special memory that will last a lifetime.”

The parade was insanely complicated to pull off. Nobody has ever tried to do anything like this in Rossmoor. The logistics of assembling 540 cars in one place—a line of vehicles more than 10,000 feet or two miles long—was tough.

RHA had to secure permits from Orange County and Seal Beach, quickly obtain a multi-million dollar insurance policy and arrange a place to stage the cars. We coordinated with the Orange County Sheriff, the California Highway Patrol and the Seal Beach Police Department.

All this had to occur during the pandemic lockdown. The core idea of the parade was that the seniors and their families would be socially isolated in their own cars and that seemed to work well.

It wasn’t until the last minute that we received the go-ahead from school administrators, setting off a fulltime rush for our festival committee. With the committee’s good planning and a little bit of luck, the parade went off without a hitch. It started and ended on time. Everybody who wanted to participate was brought in. The complaint department was out of business!

I also want to mention our generous RHA sponsors, like the Southland Credit Union, the Rotary Club and the Shops at Rossmoor.

The Shops at Rossmoor provided their rear parking lot for the assembly site, probably the only place within Rossmoor that was big enough to store all the cars, which began lining up at 8 a.m. for the 9 a.m. parade start.

A lot of people have suggested that RHA make this an annual event. We will certainly think about that possibility. The parade was so successful for a number of unique reasons: it had never been done before, people were cooped up in their homes for weeks and wanted to get out; and without the parade the seniors would not have gotten any recognition.

Whether a future parade would be as successful without those factors is hard to predict. I certainly hope we are not in the same situation a year from now. Let’s hope for the best.

Without the COVID-19 social distancing rules, we could also do some fun new things: the award winning Los Alamitos High School  marching band could lead the way, the parade could end in one of our parks where we could have a giant outdoor festival and we could have an equestrian team. Maybe we could even have a float. (I have given up on the idea of riding a circus elephant down Foster Road, but it would be fun.)

RHA is certainly open to new ideas and volunteers who want to make these kind of community events successful. Our new motto should be “Let’s keep having fun.”

But RHA also does serious work defending our community’s quality of life with a wide range of government agencies and running Neighborhood Watch. So please send us your ideas or join RHA if you are not already a member. If you liked the parade, just go to OurRossmoor.com/join