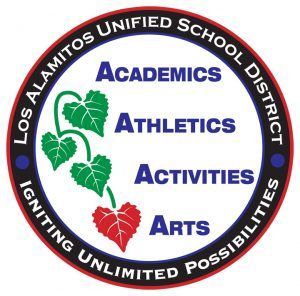 On Tuesday (10/16/2018) Dr. Sherry Kropp and her team from the Los Alamitos Unified School District (LAUSD) updated the RHA and the Rossmoor Community on the school district in general and specifically on the traffic and inter-district transfer students that attend the 4 elementary schools in Rossmoor.

During the presentation and following it, there were a number of questions about Measure G the $97 Million dollar school bond issue on next month’s ballot.

You can watch the the video of the Town Hall meeting here:

45:13 – Can Leisure World vote on Measure G and are they taxed if Measure G Passes?

56:35 – Will every classroom at LAHS be modernized & will all portable classrooms be removed?

On the current property tax billings, there are two entries relate to the school district:

The “Los Alamitos USD CFD 90-1” tax line is a Mello-Roos tax that does not expire and can (and has been) increased each year by the district. Currently the amount is $198.07 per property, regardless of assessed value. This was passed in 1990.

The “Los Alamitos SFID #1” line is based on the property’s assessed value at approximately $49.85 per $100,000. This is the “Measure K” tax bond AKA the Los Alamitos School Facilities Improvement District #1

The older tax is a Mello-Roos levy approved by voters in 1990 to help modernize Los Alamitos schools. In public meetings before that vote, school officials had said that the “maximum tax” would be $54 per property for 30 years. Often, they referred to the tax as “just $4.50 a month.”

But the fine print in the documents tells a different story. First, the Mello-Roos tax does not expire. And the district is allowed to raise the tax annually by up to 4.75 percent, which it now plans to do every year until 2042.

The Mello-Roos tax is already $157 per property because of previous increases ordered by the board. With the newly revealed increases, the tax will be $200 five years from now. When the related construction debt is finally repaid in 2042, it will be $576.

Most of that money will go to repay a single $27 million construction loan that the district took out last year to continue renovations.

We did a poll asking area residents their opinions on Measure G. Here is are the responses as they were received:

I usually vote yes but this time will be voting NO. We still have the old bond on our property taxes and this will mean there will be 2 bonds we are paying on (for most over $500). This old bond should have already been gone. If it was, I would be voting the other way.

I have seen improvements made at all of the LAUSD schools over the last few years. I did not see anything compelling in this bond description to add another $97 Million to the school budget for improvements. I will vote no. My husband shares my view and will also vote no.

Any “details” about the improvements and modernizations per school? Voters need more information about specifications, costs, etc.

LAUSD has to be the greediest school district in the country! We got raped with Measure K just a few years ago and they are back for more! Nothing more than a bond for job security. Wake up people! Read – https://www.ocregister.com/2013/08/16/los-alamitos-schools-boost-taxes-to-repay-construction-loans/

I’m on the fence but hedging towards No. The bond is needed to repair the high school my concern is the out of district kids. Living in Rossmoor and within the roads that drivers take to get to the schools the Ive seen wear and tear on our roads & schools from families that will not pay for the tax. Find a way to make it fair for all families to contribute. Why should the district families have to pay for bonds for families who dont respect or neighborhood and treat our roads as a speedway on days they are late to school. You have families coming from as far Montebello, Downey, Cerritos, La Palma . A message has to be sent to the district and parents that while we may welcome you respect our schools, communities and contribute. Coming to Los Al should be a privilege not an entitlement.

Our taxes should not be increased to pay for these bonds and should not be approved by the voters. LAUSD recently spent consider bond money for facility improvements and does not need more so soon. We are pay taxes for facilities used by inter-district transfers who do not not pay. A reformed inter-district transfer policy would be help local tax payers and reduce congestion.

I am fully in favor of this bond measure. It is much needed to modernize the 1960s high school and other facilities in our school district. I also believe that it is important that we elect school board members that will keep the budget in check so that we don’t need to do another bond in 10 years – of which the current school board has committed to do. Please know too, that for school districts like Los Al it is pretty typical to pass facilities improvement bonds about every 10 years. My children will be out of the school district by the time any money would come to it for modernization – and I am still 100% for the bond.

The attendance of LAUSD is actually going down like LBUSD if you remove the kids that get imported in to keep teachers and the admin employed. So WHY don’t you tax these families from outside of LAUSD that are riding on Measure K and Measure G tax coat tails and our dime? This is insane! Why tax us on dying attendance that is illegally propped up!!! Also, I went to Los Al. That school is made of poured cement. Last I heard, cement lasts for hundreds of years! Throw some paint on the buildings and you are good for another decade! They don’t need any new buildings added!

I Am Voting Yes on Measure G

Why  I am Voting No on Measure G

*- Don’t take our word for it, verify the amounts on your property tax bill:

The “Los Alamitos USD CFD 90-1” tax line is a Mello-Roos levy/tax that does not expire and can (and has been) increased each year by the district. Currently the annual amount is $198.07 per property, regardless of assessed value. This tax was passed in 1990.

The “Los Alamitos SFID #1” line is based on the property’s assessed value at approximately $49.85 per $100,000. This is the “Measure K” tax bond AKA the Los Alamitos School Facilities Improvement District #1