Tales of romance, neighborhood rivalry, odd psychological events and enduring family ties in the tree-lined streets of our community were among the entries in the Rossmoor Homeowners Association’s Fiction Writing Contest for 2012.  In its fourth year, the contest had 17 stories entered, all with a high level of creativity, literary quality and empathy.

The judges selected “New Beginnings: A Rossmoor Romance” by Karen Gardner, the winner, and “The New Fence” by John Boland as the runner-up.  In addition, two other entries earned honorable mentions: “The Patient” by Vince Carfi and “Out of the Blue” by Chuck Sullivan. 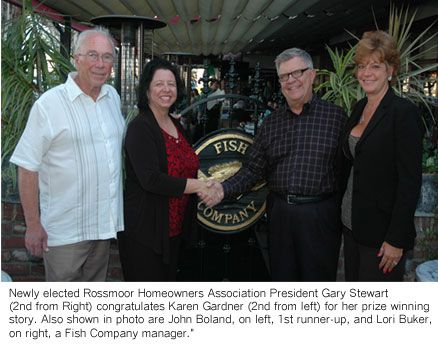 Our judges for the contest were Susan Denley of Los Alamitos, associate features editor of the Los Angeles Times, who has been a writer and editor for more than 30 years.  She is also an avid reader of fiction. The second judge was Coralyn Fouts of Anaheim, who teaches literature and composition at Cal State Fullerton and Irvine Valley College.  She has a master’s degree in English literature.

“Rossmoor Romance” is a tale about a single young woman embarrassed by having to move back into her parents’ Rossmoor home and the unlikely encounter that follows with a handsome young man.

Denley and Fouts wrote that they were “impressed by the quality of the writing, the humor and the exploration of what has become a common scenario in Rossmoor and elsewhere: an adult moving back into the family home.”  When the protagonist is forced to walk her mother’s pet rabbit, the authors said they could feel her discomfort. And when she meets a young man in a similar predicament, “he knows what she is going through.”

“The New Fence” is a “story about two irascible neighbors whose feud gets out of hand,” the judges found. It is “well-paced, effectively told mostly through dialogue, and had us laughing out loud, especially when the parrot starts squawking “cheapskate.”

“The Patient” is a clever comedy about a person who awakes after a 40-year coma with some strange mumbling that confounds a Rossmoor psychiatrist.  And “Out of the Blue” is an inspiring story about a long-lost son who turns up on a Rossmoor doorstep one day and is reunited with his father.

All of the entries represent the tremendous creativity that goes on every day in our community by people who draw, write, cook, make music, and create things of their own design. The RHA Board of Directors is gratified that the writers shared this wealth with the larger community.